You want advice? Yeah, I could dole out some of that. I could lecture on the value of networking. I could ramble on the virtues of listening.

Or I could just give you the advice you really need to hear:

Stop listening to me.

If you're reading this, you're a student at the University of Missouri's School of Journalism, which means you've accidentally stumbled into one of most amazing places to do journalism in the entire world. You are surrounded by some of the smartest journalism people in the universe. You have opportunities beyond measure, and they exist within a three-block radius of Shakespeare's Pizza.

Journalism students spend way too much time listening, and not nearly enough time building things and screwing things up.

So if you're still reading, this is me giving you permission to do whatever the hell you want. That's why you're here: To build awesome things. To try stuff that all of us in the real world will tell you is too stupid to try.

If you're still reading this, you're wasting time you can't afford to lose.

6:27: What's it like to work at Politico? Summers says it is intense and can be demanding, but she has a wide range to cover a variety of political topics; often, stories she wouldn't be able to write at other news organizations. But don't be afraid - Summers says there's room for younger journalists, too. She says the newsroom is young and looks for journalists who are obsessed with politics and have strong writing and story telling skills.

6:25: Deadlines on the campaign trail can be tight. She mentions a time she wrote a story in under 20 minutes (on her Blackberry) while fellow Politico reporters drove and made calls.

6:22: Juana Summers is on ONA's board of directors. She says to definitely get involved, attend conferences. "It's totally worth it." Have ideas about how to help ONA or make it stronger? Summers says to contact her!

6:20: "It really helps to like the people that you work with." Summers discusses that when being embedded with other journalists, it's important to build relationships with them, even when working for competing papers. "If you don't make friends, you're not a nice person."

6:19: Hermain Cain, John Huntsman and now Rick Santorum. Almost Rick Perry (but his campaign dropped, too). As candidates drop, Politico moves Summers around. "It's a little bit of a luck of the draw." Senior correspondents are more likely to be assigned candidates who are most likely to receive their party's nomination.

6:18: Summers says her convergence journalism background (she's a 2009 Mizzou grad!) has helped her juggle all the things she's asked to do for her job.

Written in November of 2011

There are so many things about life that you have to experience yourself to really understand, things you can only learn by making a few mistakes, and lessons that will only be valuable once you look back on them. But there are some things in life that you learn by example. Some stuff you’ll get right the first time without screwing something up first. I’m here to save you some time -- and trouble -- by sharing some of the things I’ve learned along the way.

My journalism training started long before Mizzou. To make a long story short, my parents met working at a TV station in the late 70s and both ended their careers still working in journalism. My mom spent 25 years as a columnist for the San Diego Union Tribune, and my dad finished 35 years in the business as the Director of Operations for the NBC O&O in San Diego. So, a lot of my education came from them and their friends. My parents worked late, they were stressed a lot, we had to give up swim meets and family trips because they just didn’t have a lot of free time outside of work. That was just the tip of the iceberg.

I guess the first lesson I want to pass on to you is the “tough stuff” about this profession. No matter what sequence you’re in, there are more sacrifices in this line of work than almost any other, and if you want to succeed, you have to get that into your head and be comfortable with it. I know you’ve heard it before, but get really cozy with the idea of terrible hours, terrible pay, hard manual labor, and very little recognition for all that work. Keep in mind, most of your friends will be working corporate or other stable jobs, working normal hours.

Updated March 8 to include Christopher Ave

Do you find yourself scouring the Web for analysis of the ongoing election season? Are you refreshing Twitter 15 times in a hour to see who won a primary race? If so, we have the presentation for you.

The event will take place at 5 p.m. in the Spencer Room (200B) of the Reynolds Journalism Institute. This is a great opportunity to learn more about ONA Mizzou before our April elections.

Do you have questions you’d like answered at the event? Tweet them to us now (@ONAMizzou), so we’ll have a list before the discussion starts. You can also comment below or write on our Facebook Wall.
*Subject to change based on campaign events
White house photo courtesy of Flickr user Bernt Rostad

If I’m writing a letter to myself as an undergraduate at Mizzou, I might not say the things about being savvy about converged technology or about learning computer programming or iOS/Droid app development that ONA might want me to say.

Instead, I’d say this: Get out of the house. Don’t take that weekend reporting shift. Go to a few parties and network because the people who are your friends today are your job contacts in the future. The only thing a purely academic life prepares you for is an academic life. This has worked out for “future you” pretty well, but it’s not the way to become the next great foreign correspondent or the next maker of Oscar-winning documentary films.

You got into the J-school because you’re smart, across the board smart – English, math, science, social sciences, etc. You can learn just about anything you spend two weeks on. I’m not worried about your tech skills, your ability to work on multiple platforms or your drive and passion for journalism.

I’d tell you to develop better people skills, so that those first jobs in tiny cities aren’t quite so miserable when it turns out no one else graduated Phi Beta Kappa, and they don’t really care that you do.

Explore what ONA has to offer online 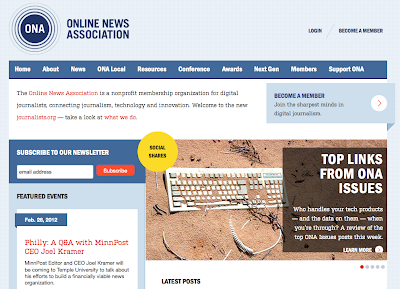 While the student leaders at ONA Mizzou strive to bring you a variety of resources, our parent organization, the Online News Association, is a resource in itself. After all, its the reason we're a club!

ONA offers a plethora of Web resources that are well-worth exploring, from ethics and issues discussions, to examples of great online news, to networks for Web journalists. Here are a few ways to learn more about ONA and what it provides.


Get to know ONA on Facebook
If you're a college student, you can't deny the amount of time you spend of Facebook. Why not jazz up your news feed by adding a little ONA? Check out ONA's page and "like" it to stay current with the organization and online news.