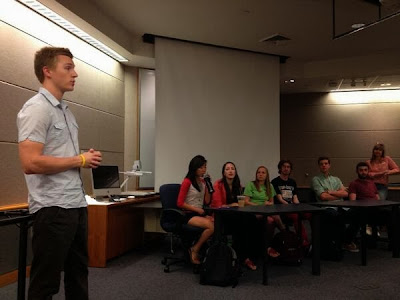 We've got a crowded room here at 110 Lee Hills Hall (the Missourian building), but there are still plenty of seats for any latecomers. Hope to see some more underclassmen here to learn more about the options they have in the journalism school!

Amy Bruer, an undergraduate adviser, says not to get bogged down by all of the options - a lot of times, you'll end up figuring it out as you go. Also, the journalism school makes sure all students get a taste of multimedia reporting, because no matter what sequence you're in, you'll likely end up working in a multimedia environment.

Should a student elect for Strategic Communications, they have the option to choose between three newsrooms: Mojo Ad, AdZou, and Yaya Connection. They all have different environments, catered toward different emphasis areas and student strengths.

By Andrew Gibson
I started at MU dreaming of becoming an ink-on-paper politics reporter. Yeah, I wanted to chase presidential candidates around the country. And maybe have an occasional appearance alongside Wolf Blitzer on CNN's "The Situation Room."

Then, not five months later, I started leaning toward magazine journalism. It sounded more relaxed than government reporting, and the thought of scrutinizing reader-submitted poetry in the New Yorker newsroom had me feeling fancy.

Finally, I settled on the multimedia glory of convergence -- but not before first going through a phase of broadcast infatuation.

What I'm getting at is: Picking the right track in the journalism school can be difficult. Not only do you have more than 30 to pick from, but you'll also be surprised by how much your interests change in just a few months. Plus, it's possible your envisioned career path doesn't pair best with the emphasis area you have in mind.

Although we can't make the decision for you, we can offer help. Join ONA Mizzou at 5 p.m. on Thursday, Sept. 26, as we host a panel of students and academic adviser Amy Bruer for a question-and-answer session on journalism school emphasis areas. They'll explain what to expect from course work and give you the lowdown on the culture of each newsroom or advertising agency. The event location is 110 Lee Hills Hall (that's the Columbia Missourian building).

If you have questions, don't hesitate to leave a comment here, email us or tweet us @ONAMizzou. 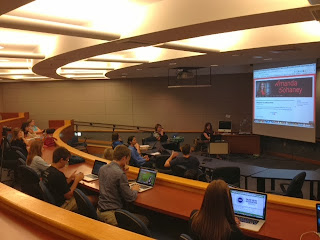 We're just about ready to start here in 110 Lee Hills Hall (the Missourian building, in the basement) with Rob Weir, the director of digital development of the Columbia Missourian, Vivian Abagiu, the photo editor at the Columbia Daily Tribune, and Annie Hammock, the interactive director at KOMU-TV.

Annie Hammock (@anniehammock) is up first, talking about whether or not students need to learn to code. She crowdsourced the question and got some great feedback, which you can see here.

Derek Wills (@derekwillis), from the New York Times, says that students should build it themselves if they're able, but to keep it simple.

Students should look at building their portfolio as an opportunity to learn or brush up on their HTML skills.

Millions of people can build a portfolio with Weebly, Wix, etc. - set yourself apart by showing that you can work outside of those drag-and-drop ecosystems.

The most important point, from Will Haynes (@willhaynes) - forget the medium if there's no good content. 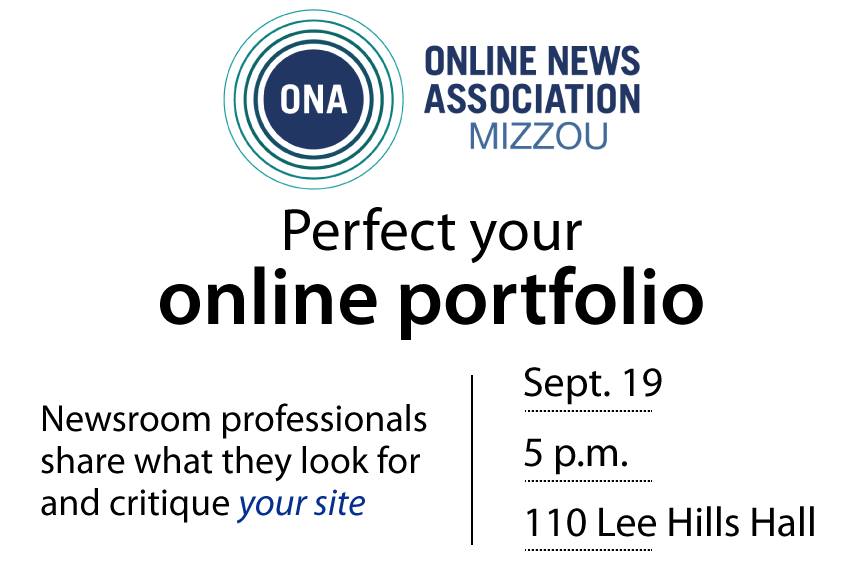 Although our generation is known as digital natives, many students cower at the idea of creating and updating an online portfolio. It may seem like a daunting task, but a site that collects all of your work and presents it clearly is an invaluable tool, especially in an age when prospective employees are often Google-searched before they're ever offered an interview.

There are many questions you might be asking yourself. How much personal information should I put on my portfolio? Should it function like a blog or should I use a static layout? How can I incorporate social media into my site?

Get the answers to your questions at 5 p.m. on Thursday, Sept. 19 in 110 Lee Hills Hall, when ONA Mizzou hosts a panel of local journalists to discuss digital portfolios.
Read more »
No comments:

Eight ways students can get started on LinkedIn

In an age where Twitter and Facebook dominate the social networking scene among young people, many students have ignored LinkedIn. They see it as a place for established professionals, not 20-something job seekers.

Here's some advice: Don't be one of those people.

LinkedIn is a gateway into the professional world. When you update your profile with internships completed, skills learned and degrees earned, you expose yourself to thousands of employers. It's not difficult and it doesn't take long -- but your profile won't fill out itself. Below are eight tips I've learned from professors and from a tutorial given by a LinkedIn employee that I've incorporated into my own profile.