The following letter was submitted March 26, 2012

I want to talk to you about the big test you have coming up. It’s one you’ve agonized over for longer than necessary, and one you’ve probably procrastinated preparing for, too. I’m sure this sounds like every test you’ve ever had, but this one is different. This one is comprised of an infinite number of questions and will last much longer than 50 minutes. To be more specific:

The test will measure whether you are an informed, engaged, and productive citizen of the world, and it will take place in schools and bars and hospitals and dorm rooms and in places of worship. You will be tested on first dates, in job interviews, while watching football, and while scrolling through your Twitter feed. The test will judge your ability to think about things other than celebrity marriages, whether you’ll be easily persuaded by empty political rhetoric, and whether you’ll be able to place your life and your community in a broader context. The test will last your entire life, and it will be comprised of the millions of decisions that, when taken together, will make your life yours. And everything, everything, will be on it. 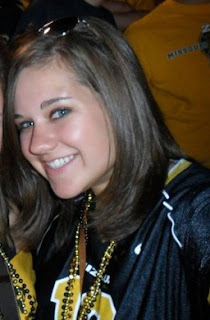 
Hello everyone! I'm thrilled to be the new ONA Mizzou president.  I'm a junior from Chicago in the convergence journalism sequence. I also have minors in film studies and business.  I've chosen to focus on radio reporting and newsroom management in the coming year.

This summer, I will be interning in the news department at WGN Radio in Chicago, as well as writing for Foodmafia.  Along with these two journalistic pastimes, I will be working as a quality reviewer for Millennium Information Services in Itasca, Ill., and waitressing in Lake Geneva, Wis.

The following letter was submitted April 11, 2012

I’m told I should write this essay as if I were sending advice to my 20-year-old self. I hesitate to do that.

Because I don’t want to scare her – or any other J-School student -- away with the dark side of 21st-Century journalism.

The road ahead isn’t easy for the Old Me or her classmates in the news-editorial sequence. She’ll see her own newspaper go into bankruptcy protection and other storied publications fold. Time and again, she’ll watch talented journalists pack their desks after being laid off but it will never get any easier. And she’ll worry endlessly about what happens to democracy without a free and vibrant press.

It’s not the journalistic utopia the Old Me imagined in 1995, but I would never tell her that.

Because, God help me, I want her to stick with it.

Because, even with the incredible heartbreak, it will be an amazingly fulfilling ride.

The following letter was submitted March 2, 2012

Have you ever seen the movie Yes Man starring Jim Carrey? Carrey’s character Carl Allen is a newly-divorced, middle-aged guy with a boring job. Carl dramatically transforms his dull life-- he gets a girlfriend, a dream promotion-- by saying ‘yes’ to every new opportunity for one year.

Now, eventually, too much ‘yes-ing’ gets Carl in trouble. So, without touching on setting boundaries, consider your comfort zone when I share my best piece of advice with you: Say ‘yes.’ Exceed the expectations set for you whenever possible and do it with a smile.

This can-do attitude helped me land my job as a Production Assistant at Oprah Radio in Chicago.

Set the bar high for yourself and do it early. Shortly after I submitted my application for the position, an HR manager emailed me to arrange an interview in Chicago the very next morning. She knew I was away at school in Missouri. I was reading this email in the late-afternoon, calculating how to swing an interview six hours away amidst work, projects & other commitments.

But, this was a huge opportunity. So, I said ‘yes.’ I packed my bags and drove to Chicago that evening. During the interview, the staff expressed how impressed they were that I drove overnight to make it. Twenty-four hours later, I accepted an offer for the job. I like to think that opportunity was a test I passed with my Yes Man attitude.

April means prime election season. But not just for national politics - for ONA Mizzou, too! If you've ever been interested in working behind the scenes for ONA Mizzou, this is your chance to get involved and take the reigns.

ONA Mizzou student leaders plan and coordinate events (like elections coverage with political pros), create awesome blog series (see Letters Home) while managing a finely tuned social media plan (check out our Facebook and Twitter). Who knows - next year's student leaders could come up with and do even more.

Candidates for the executive board need to be creative, interested in online news media and able to commit a little time each week to ensuring ONA Mizzou is operating at it's fullest potential.

Four spots on the exec board are up for grabs! If one of these strikes you, fill out an application and attend the elections meeting held at 5 p.m. on April 19 in 100A RJI (Palmer Room).

What I've learned since I've been gone:
Honestly, the list is too long to start so I'll touch briefly on a few things.

1. Don't be afraid to ask questions. Some people have a tendency to try and do everything themselves, and that only makes it worse on everyone. In my first week as sports director, I received phone calls from viewers and my news director because I pronounced the names in the area wrong. Names that look normal may be pronounced differently. Had I asked, I wouldn't have looked like an idiot on the air.

The following letter from ONA Mizzou co-founder Amanda Klohmann was submitted March 5, 2012
I’m going to start this letter home by telling you about another letter. Right before graduation I was handed a sealed envelope. Inside the envelope was a letter I had written to myself a few years before during one of my first journalism classes. The letter was your typical time capsule style activity; write your goals, write your feelings, write your little journalistic heart out. I remember totally blowing it off.

Instead of putting forth too much effort, I just wrote a bulleted list, a simple bucket list of the things I wanted to do as a journalism undergrad. A few years, a lot of deadlines, and a cap and gown later, this list was the perfect way for me to reflect on my time at the #bestjschoolever. Slacking off on the activity had actually worked out just fine. I used my list to take note of the things I had done. I had joined the clubs, earned the academic honors and even found a way to hang out at the Sports Illustrated offices in New York for a summer (my bulleted list may have been brief, but it was oddly specific about that one). I felt great about all of the items I could cross off, but I quickly found there were things on the list I couldn’t touch, things I had never even attempted.

And now, in this letter home, I realize there was a lesson in all of the un-crossed-off items. It is okay for your dreams and goals to change.